This book is not simply the great American novel; it’s the great novel of las Americas. It’s the great world novel! This is the international story of our times. Masterful — Sandra Cisneros

Heartstopping… doesn’t let up… you will urge them on, fists clenched ― The Times

AMERICAN DIRT transported me through genuine fear and had me willing on every human being struggling to get to a better life. Written with masterly restraint, it is a roaring human triumph

It’s been a long time since I turned pages as fast as I did with American Dirt. Its journey is a testament to the power of fear and hope and belief that there are more good people than bad.

From its heart-stopping first sentence to its heart-shattering last, Cummins’ story of immigrants is just what we need now

From the opening page your heart will be in your mouth You will never want to put this story down, Jeanine Cummins has written a novel of such moment, such danger and such compassion, it will change your view of the world

Urgent and unforgettable, AMERICAN DIRT leaps the borders of the page and demands attention, especially now

Riveting, timely, a dazzling accomplishment. Jeanine Cummins makes us all live and breathe the refugee story. If a book can change hearts and transform policies, this is the one

Both a moral compass and a riveting read
Book Description
The extraordinary global bestseller – a once in a lifetime read about the lengths a mother will go to to save her son
From the Back Cover
‘Breathtaking… I haven’t been so entirely consumed by a book for years’ Telegraph ‘I couldn’t put it down. I’ll never stop thinking about it’ Ann Patchett An extraordinary story of the lengths a mother will go to to save her son, AMERICAN DIRT has sold over a million copies worldwide. It’s time to read what you’ve been missing. Lydia Perez owns a bookshop in Acapulco, Mexico, and is married to a fearless journalist. Luca, their eight-year-old son, completes the picture. But it only takes a bullet to rip them apart. In a city in the grip of a drug cartel, friends become enemies overnight, and Lydia has no choice but to flee with Luca at her side. North for the border… whatever it takes to stay alive. The journey is dangerous – not only for them, but for those they encounter along the way. Who can be trusted? And what sacrifices is Lydia prepared to make.
About the Author
Jeanine Cummins is the author of three previous books, the novels The Outside Boy and The Crooked Branch, and one true crime work, A Rip In Heaven. She lives in New York with her husband and two children. You can follow her on Twitter: @jeaninecummins. Publisher

Be the first to review “American Dirt” Cancel reply 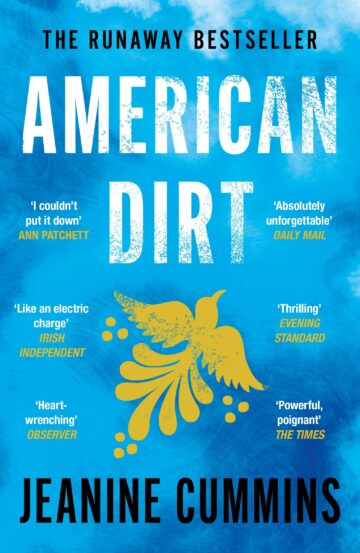 You're viewing: American Dirt £3.00
Add to cart
We use cookies on our website to give you the most relevant experience by remembering your preferences and repeat visits. By clicking “Accept”, you consent to the use of ALL the cookies.
Cookie settingsACCEPT
Manage consent