NOW Music proudly presents NOW That’s What I Call Punk & New Wave – a collection encapsulating the spirit of the times, and of the movement that changed the course of mainstream pop music.

34 tracks across 2 LPs, present the era’s most iconic artists, including The Clash, Blondie, Ramones, U2, Siouxsie And The Banshees, Adam & The Ants, The Jam and The Cure.

‘London Calling’ by The Clash, and The Undertones’ breakthrough hit ‘Teenage Kicks’, kick off the first LP – alongside classics from The Stranglers, Siouxsie And The Banshees and Ramones.

The late 70s and early 80s saw an explosion of punk and new wave groups and artists moving from the underground to mainstream chart success. No.1s from The Jam with ‘Going Underground’, ‘Brass In Pocket’ by Pretenders, The Boomtown Rats’ ‘Rat Trap’, Dexys Midnight Runners’ ‘Geno’, and Ian Dury & The Blockheads’ ‘Hit Me With Your Rhythm Stick’ are all here, as well as top 5 hits from Squeeze, Tom Robinson Band and Patti Smith.

The genre also gave the first crossover success for bands that became the biggest acts in music during the late 70s and early 80s, including The Police, U2, The Cure, Blondie, all featured – along with Adam & The Ants’ ‘Dog Eat Dog’ from their breakthrough album ‘Kings Of The Wild Frontier’.

True unique masterpieces of song-writing and performance that sound as fresh today as they did then include Iggy Pop’s ‘Lust For Life’, The Members’ ‘Sound Of The Suburbs’, Joy Division’s ‘Love Will Tear Us Apart’, and ‘Rock Lobster’ from The B-52’s.

Brilliant covers flooded the charts – bringing new arrangements and different perspectives to established tracks, including ‘Money’ by The Flying Lizards, and Blondie’s ‘Hanging On The Telephone’.

A fantastic collection of unique tracks that summarize an incredible time for music.

The B-52’s – Rock Lobster
Devo – Whip It
The Flying Lizards – Money
Squeeze – Cool For Cats
XTC – Making Plans For Nigel
Tom Robinson Band – 2-4-6-8 Motorway
Joe Jackson – Is She Really Going Out With Him?
Patti Smith – Because The Night 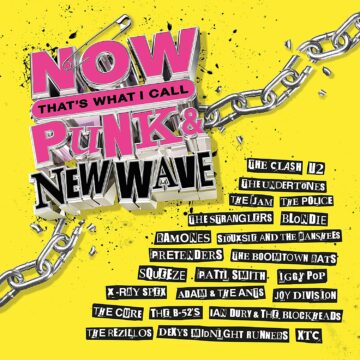 You're viewing: NOW Thats What I Call Punk & New Wave £26.99
Add to cart
We use cookies on our website to give you the most relevant experience by remembering your preferences and repeat visits. By clicking “Accept”, you consent to the use of ALL the cookies.
Cookie settingsACCEPT
Manage consent